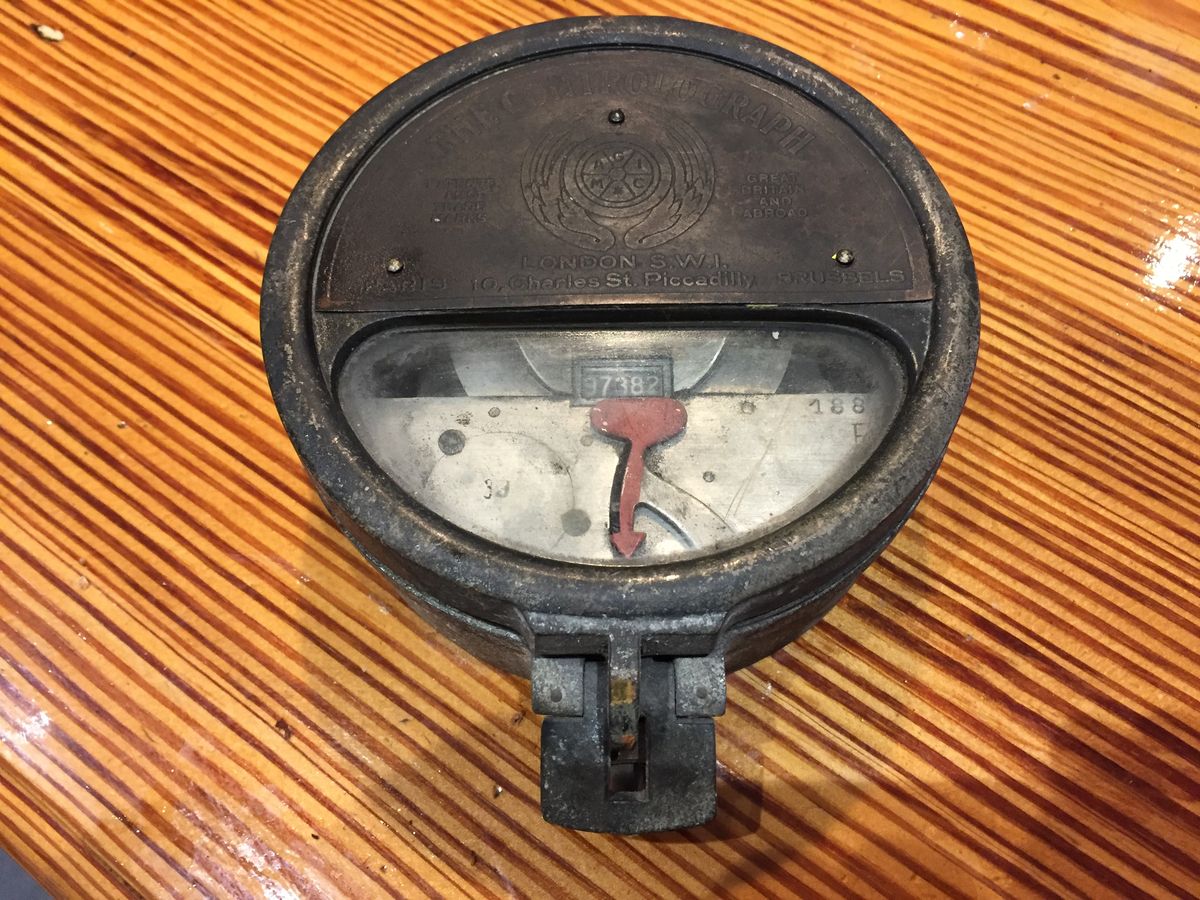 "Controlograph" made by the The Mechanical and General Inventions Co., Ltd., 10, Charles Street, London, S.W.1. The acronym "MAGIC" is featured on the brass data plate on the front of the machine.

It is an early type of tachograph clock that was driven by a speedometer cable and used paper discs driven by clockwork to record vehicle movements. A much more sophisticated, and expensive, recorder than the more common Servis Recorder, commonly referred to as "the spy in the cab". In 1928 the cost of this item would have been £15 15s, which was a sizeable sum at the time. This example came from Watts Bros (Beverley), who were general carriers and started by taking over their father's haulage business in 1919.

Does anyone have any of the paper discs or pictures of them as fitted? I have never seen one and would like to see the markings and the material from what they are made. Please contact me if you can help. 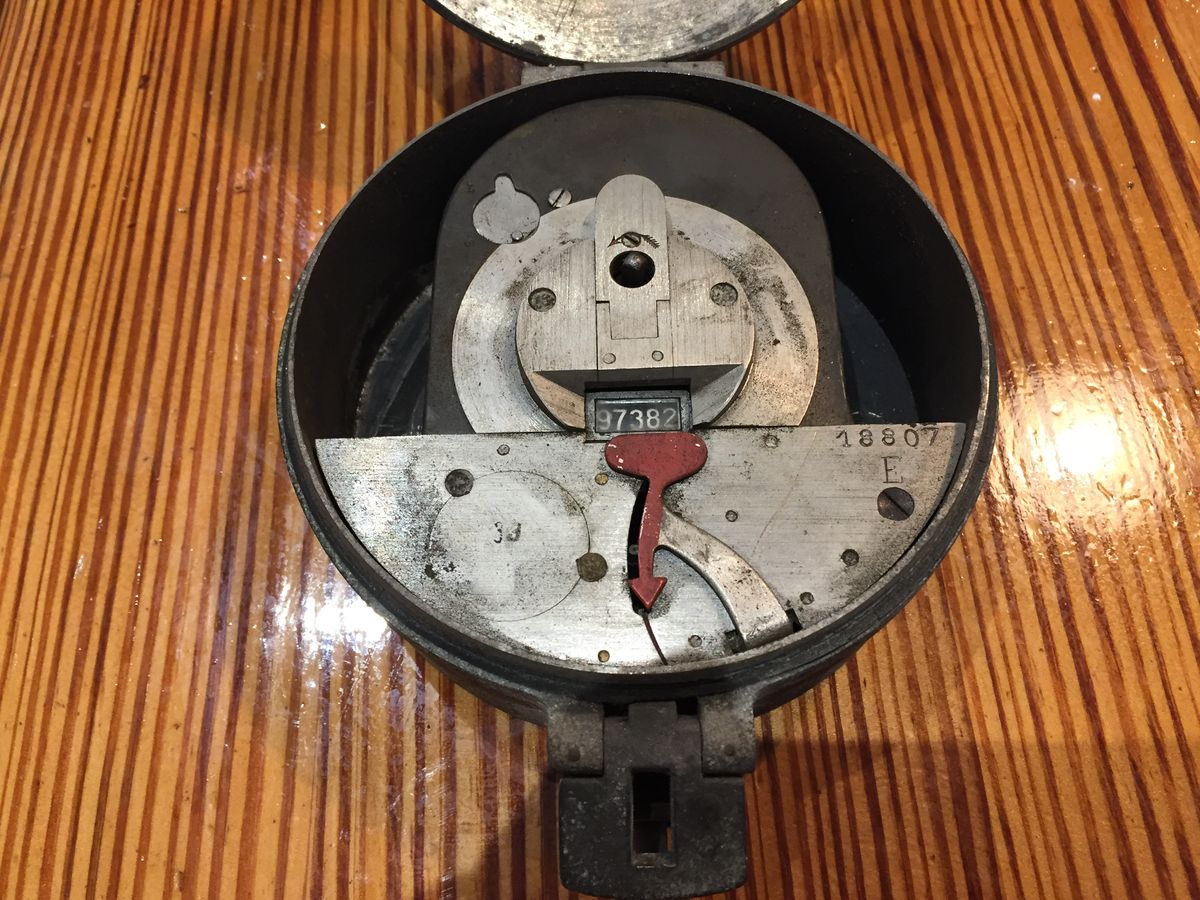 The operation of the gauge was described in the Commercial Motor of 30th December 1924 as follows:

Many efforts have been made to produce a satisfactory device for accurately recording the running of a motor vehicle, and one which will act as a check, not so much upon the driver as upon terminal and other delays, which, after examination, it may be found possible to obviate or reduce. Naturally, such an instrument does act as an inspector of the driver's actions, but this, to our mind, is not so important in itself as to justify the use of these. devices, for it is our experience that most drivers of commercial vehicles carry out their duties in a conscientious manner.

A new type of recorder has recently been brought to our notice. It is particularly interesting in that it is the only one on the market giving a triple record of what the vehicle is doing, this record being obtained in three different ways--by vibration, mechanical transmission and clockwork. In the event of the mechanical transmission becoming disconnected, there is the vibration record which shows if the vehicle has been used without permission. In addition, the recording paper disc is perforated by the clockwork mechanism, and this shows if the paper dial has been tampered with.

The instrument consists of a specially and substantially made ' clock and recording mechanism contained in a strong aluminium airtight case. The clock works for 36 hrs. on one winding, and the paper disc is rotated by a toothed wheel and shows a dial of 24 hrs.

The recording by a transmission of the speedometer type is effected by a perforating needle, which marks a point every 220 yds. The needle works to and fro, and, as the disc is constantly rotating, what may be termed curved angles are recorded on the paper. The side of each angle is made by 24 points, and equals three miles, consequently the complete angle represents six miles, and the distance between the sides at the base provides a means for estimating most accurately the speed of the vehicle at any particular period.

The vibration record forms practically the base line of the angles. It is independent of the transmission. operates through the medium of a different needle, and shows the times during which the vehicle is in operation, even if the mechanical transmission has failed or is disconnected.

The third method of recording is effected by the indentations caused by the toothed wheel which rotates the paper disc. These indentations show exactly when the disc was inserted, when it was removed, and whether it has been taken out in the endeavour to defeat the control.

The Controlograph has been on the markets of France and Belgium during the past two years, and has afforded considerable satisfaction. Incidentally, it was exhibited at Olympia, where it created favourable interest. Arrangements have been made by the concessionnaire, A. Picard, 4, Burlington Street, London. W.1., for the instrument either to be sold out outright or supplied on hire. Trials are willingly given to potential users. 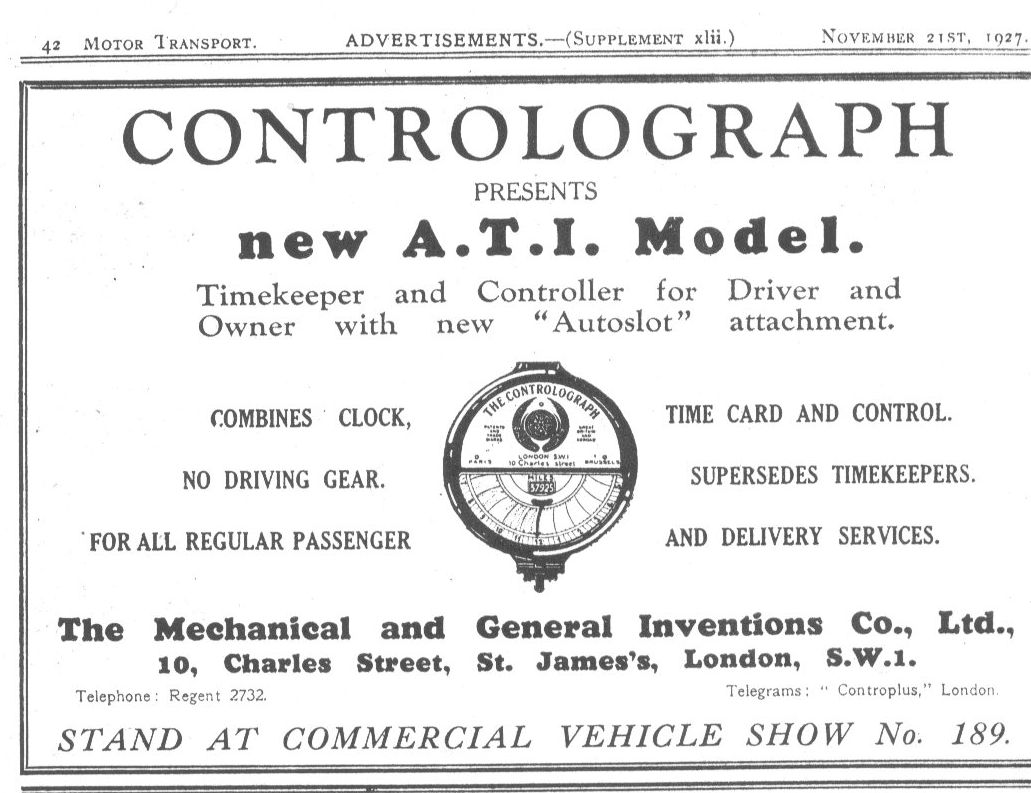