The Ketton Portland Cement Company Ltd. opened a works for the manufacture of cement at Ketton, in the county of Rutland, in 1929.  The company was a subsidiary of Thomas W Ward Ltd. of Sheffield, more commonly known for their activities as scrap metal merchants and machinery dealers.  The reason for building a works at Ketton was to take advantage of the fact that the main raw materials, limestone and clay were readily available from the Company’s quarries there.  A large source of quarried limestone was already available at that site, having been excavated over the previous 800 years to expose the underlying Ketton freestone, an oolitic limestone of even texture.  This stone of fine quality was used in the construction of cathedrals and other prestigious buildings.  The first kiln produced 75 000 tons of cement per year; by comparison, the current works now owned by the Castle Cement Company produces 1.3 million tonnes per year. 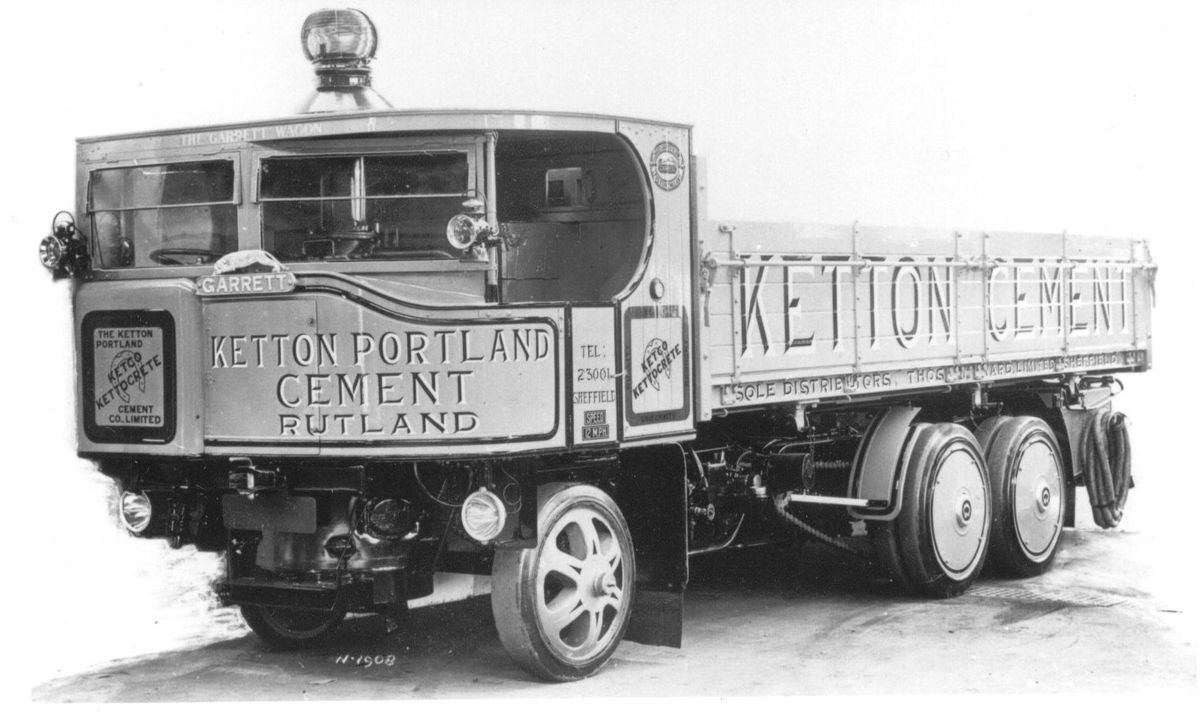 In 1934 Ketton Cement produced a handbook ‘Notes on Cement and Reinforced Concrete’ in which it was stated that ‘The distribution of cement is in the hands of Thos. W. Ward Ltd., Albion Works, Sheffield’. The handbook includes a heavily retouched photograph of a Garrett six wheeler delivering cement in Castle Gate, Sheffield.  The company had taken delivery of Garrett side tipping undertype steam wagon works number 35427 on 8th June 1930 after it had been exhibited on Garrett’s stand at the RASE show at Manchester.  The wagon was registered in Sheffield and was presumably used on local deliveries. 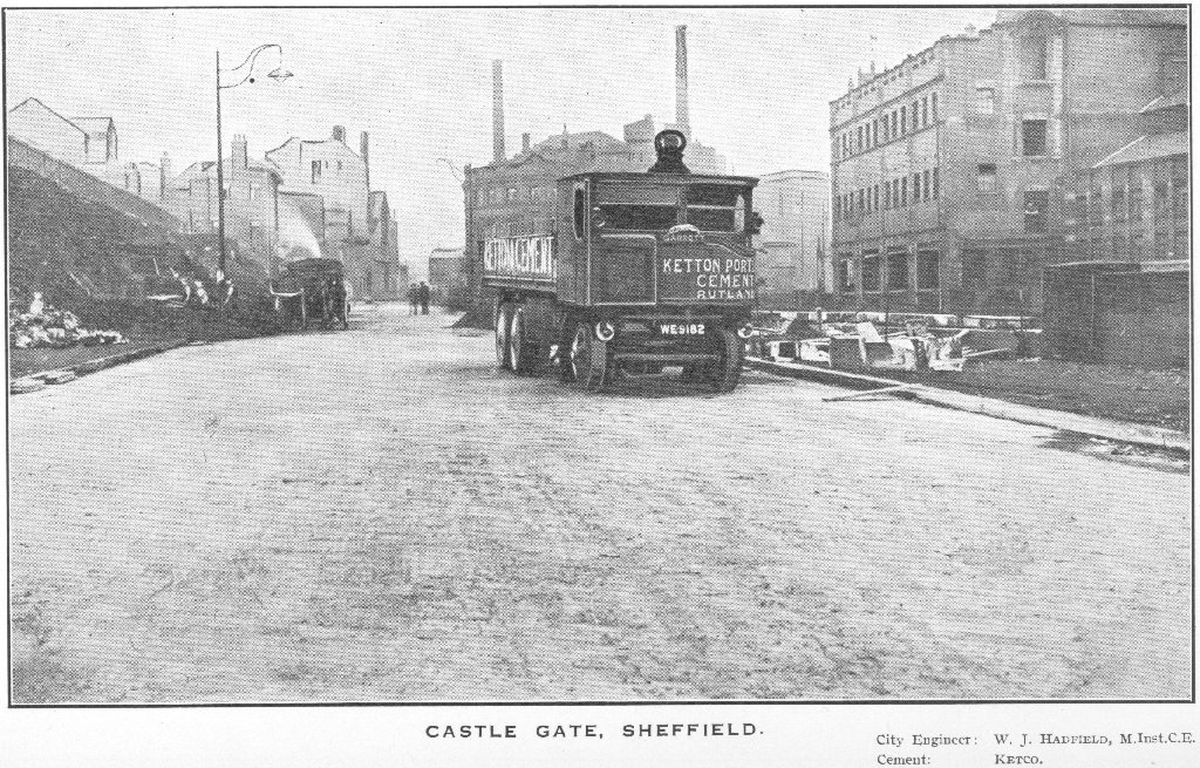 In about 1931 the wagon was sent to Pelican Engineering in Pepper Road, Hunslet, Leeds for the fitting of a Gardner oil engine.  Pelican had been appointed as an official agent for Gardner oil engines in 1931 and between 1931 and 1940 carried out more than 800 conversions mainly from petrol to diesel.  The conversion from petrol to diesel would have been a fairly simple affair probably requiring alterations to the engine mounting brackets, possibly an extension of the chassis and a suitable attachment for connection of the engine to the gearbox but the conversion from steam to diesel would have been a much more extensive operation.  In the case of the Ketton Cement wagon it can be seen from the photograph that very little of the original vehicle could have been re‑used.  The engine and boiler would be replaced with a new Gardner oil engine and gearbox; however there was still the problem of turning the drive through ninety degrees since in the Garrett engine the crankshaft was parallel to the countershaft which supported the gears and differential.  A countershaft arrangement similar to that used on chain drive Scammell lorries or the Yorkshire WG wagon would have been required.  It is pure speculation but as the Yorkshire Patent Steam Wagon Company’s premises were a short distance away on Pepper Road, is it possible that the parts were sourced here?  Other difficulties would arise due to the fact that the wagon was fitted with steam brakes to the four wheels of the bogie; the handbrake and footbrake only operated on one axle each.  The tipping gear was hydraulic, operated by the pump on the Garrett engine using water from the tank.  It would appear that this problem was overcome by dispensing with the tipping gear altogether. This would have had the additional benefit of reducing the unladen weight.  A photograph of the converted wagon was used in a Gardner brochure of 1933. 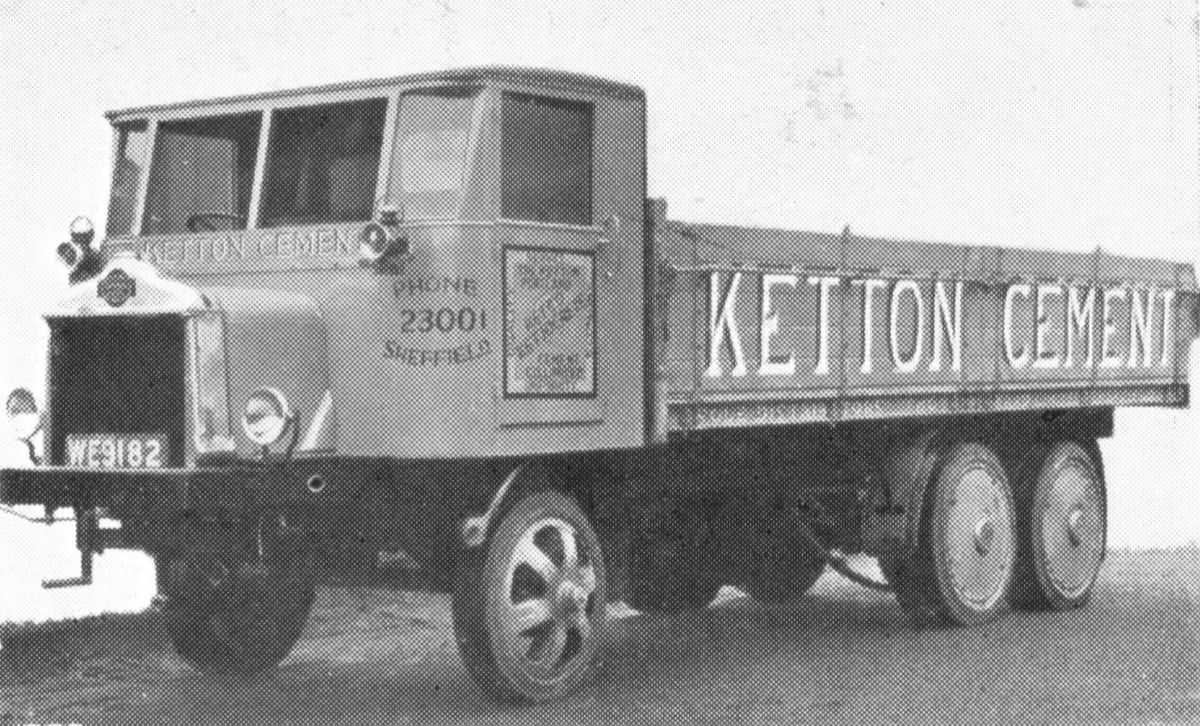 The boiler and engine from the converted wagon were sold to Len and Wilf Cole, of the Central Haulage and Motor Company, Leeds, who installed them in Garrett 35250 in 1938.  Garrett 35250, a four wheel three way tipping wagon, had been purchased new by Len and Wilf in 1929 and they stopped using it in 1945.

Wards must have been satisfied with the conversion of the Ketton Cement wagon to diesel, since in 1933 they were making enquiries with a view to converting the wagon from solid rubber tyres to pneumatics.  In June 1933 Garretts received enquiries from the Dunlop Rubber Co. Ltd. and the Firestone Tyre and Rubber Co. Ltd. and in August a similar enquiry was received from the India Tyre and Rubber Company (Great Britain) Ltd. regarding the conversion of this wagon to pneumatics.  In their replies Garretts referred to the necessary modifications to retain the existing angle of side tip, which appears to have been removed at the time of the conversion to diesel.  However, this is possibly a consequence of Garrett’s records showing that the wagon had originally been supplied as a side tipper.  At that time Garretts were offering five options for the conversion of steam wagons to pneumatics.  These options allowed for variations in tyre size and whether or not the chain drive to the rearmost axle was to be retained.  Four options took advantage of the increase in legal width to 8 feet for vehicles converted from solids to pneumatics.  The fifth option allowed the wagon to remain within the standard legal width of 7 feet 6 inches but discontinued the rearmost chain drive.  In their August reply Garretts referred to the fact that the wagon had been fitted with a diesel engine and that to comply with the current regulations on braking it would be necessary to retain the rearmost chain drive.  They recommended option No.2 in which 38” x 9” pneumatic tyres would be fitted to the front axle and twin 40” x 8” twin tyres on the rear axles.  The cost of parts for this conversion was listed as £182.10.3 or excluding the wheels and tyres £56.10.0.

Unfortunately, I do not know whether the conversion was performed, but the resulting vehicle would have been unrecognisable as the vehicle which had left Garrett’s works in 1930.  How long the wagon survived and whether it had a useful life is a mystery to me; if the wagon was taken off the road in 1934 when the road fund licence fee was increased for vehicles on solid rubber tyres then it would have been a very expensive experiment in the delivery of cement.