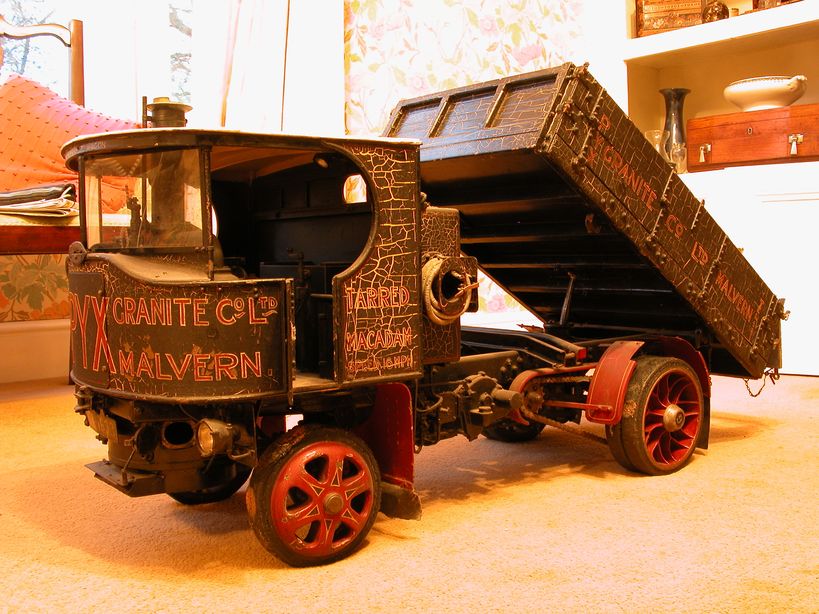 The model with the body tipped.

Models of Garrett undertype wagons were made popular in recent years by Matchbox Models of Yesteryear. The wagon selected by Matchbox was a four wheel poppet valve engined wagon with the driver in the forward position and fitted with a van body. This was an unusual choice since Garretts did not make any of this type with a van body. Prior to the introduction of the Model of Yesteryear there were several other models produced.

Plans for a 7mm scale poppet valve engine wagon were designed and drawn by P.R.Wickham and produced by the Model Maker Plans Service. The model was constructed from wood, card and paper.

A live steam model of a similar Garrett wagon was described in "Wonderful Models" and a model built to these plans, by Mr Sweet of South Petherton, was awarded a silver medal and the Road Transport Cup at the Model Engineer Exhibition in 1937. Photographs and a description of the model featured in the Model Engineer for 25th November 1937. 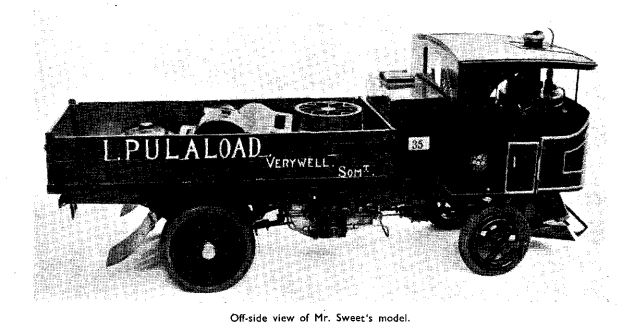 Mr Ted Napper of Malvern constructed a freelance model based on a Garrett six-wheeler in 1984. Details of this were sent to me in 2018 by Vic Francis, the current owner. Vic also provided an extract from the Model Engineer of 6 July 1990, which mentioned Ted Napper's wagon at 2" scale and using a Stuart twin launch engine. 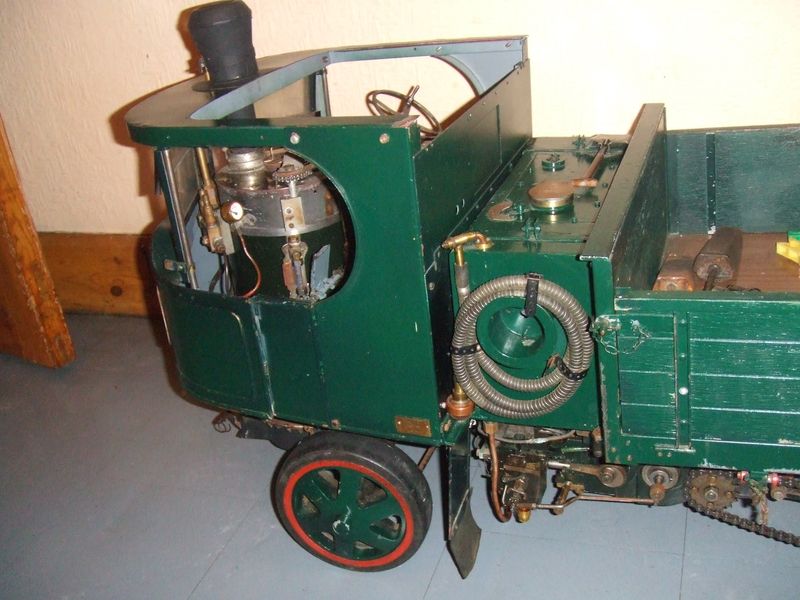 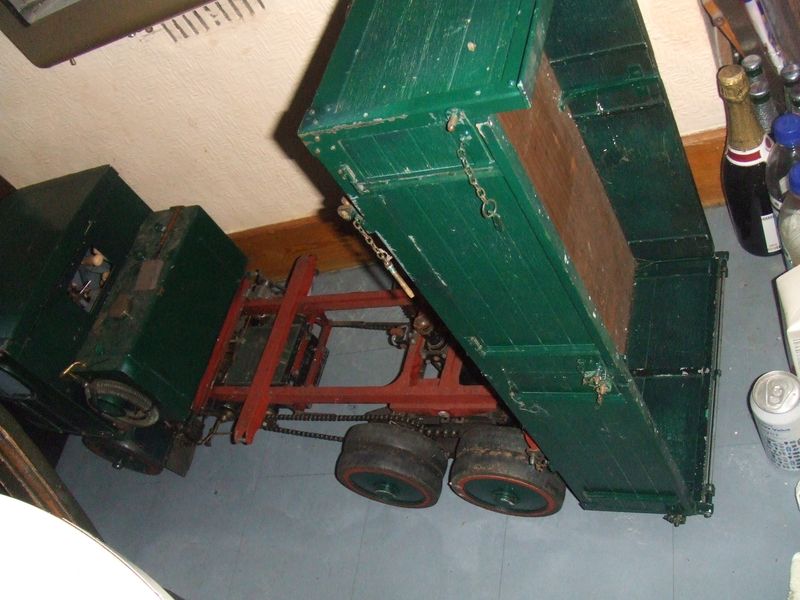 Bruce Geange of Palmerston North, New Zealand is building a model of a wagon based on dimensions he obtained from the chassis of 34661. The model is approximately 1/8th scale and the attached picture shows it in September 2015. 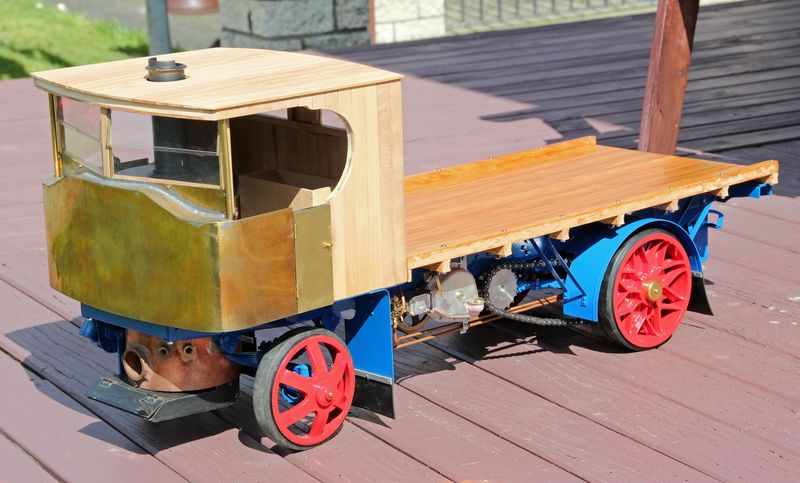 Mr Lionel Creed of Lynx Motors purchased a model from Garrett's Receiver in 1932. Lynx Motors Limited was a transport company associated with the PYX Granite Company Ltd. of Malvern Link who had several quarries at the north end of the Malvern Hills. Mr Creed had been a regular visitor to Garretts in the 1920s and 30s. His company ran a fleet of Garrett overtype wagons for transporting granite from the quarries. In 1930 the overtype wagons were replaced with a fleet of three 6 wheeled Garrett undertype wagons, one of which is pictured below. 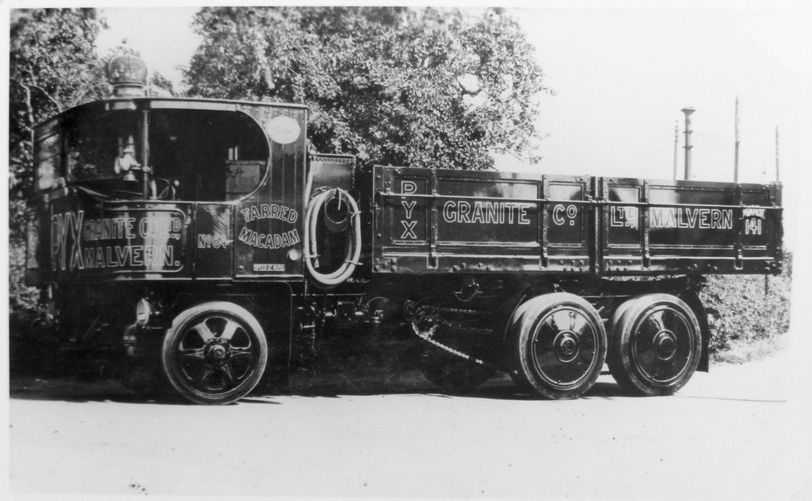 In 1932 Mr Creed obtained the wrecked remains of 6 wheeled wagon 35372, which had been delivered to Wm. Elworthy of Tiverton in March 1930. The wagon had run away backwards downhill at Budleigh Salterton in Devon, smashed through a bridge parapet and fallen upside down onto the railway line below. The wagon was recovered and delivered by rail to Malvern Link for rebuilding. It was on one of his visits to Garretts to obtain replacement parts for this wagon that Mr Creed saw the model and purchased it from the Administrator.

Copy of the entry in the Garrett Order Book.

The model had been constructed by Garretts presumably for demonstration and publicity purposes. It is built to a scale of 2 inches to the foot (1:6) and is based on an experimental wagon that had the original symmetrical shape of cab but was fitted with a poppet valve engine. The model had the new Garrett hydraulic tipping gear, which used water from the boiler feed pump and a fixed tipping ram in preference to the Bromilow & Edwards "oildraulic" tipping gear which was bought out. Several other features intended to reduce costs but not adopted in production wagons were included in the model. The most significant of these are the stop valve, positioning of the injector directly on the boiler and bronze bushes in the front and rear axles. These features lead to the identification of the wagon as closely modelled on 35054.

An entry in a Garrett costing book shows that the cost attributed to building the model was a phenomenal £158 15s 0d. No date is given in the book but order number 2800H was completed in July 1927. 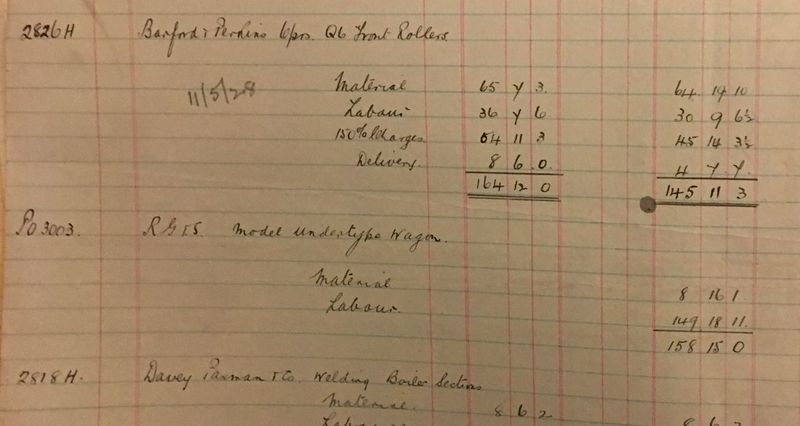 Copy of entry in the costing book.

Mr Creed had the model repainted in the livery of his company. Unfortunately the paint used was not compatible with the original paint; resulting in the snakeskin effect. 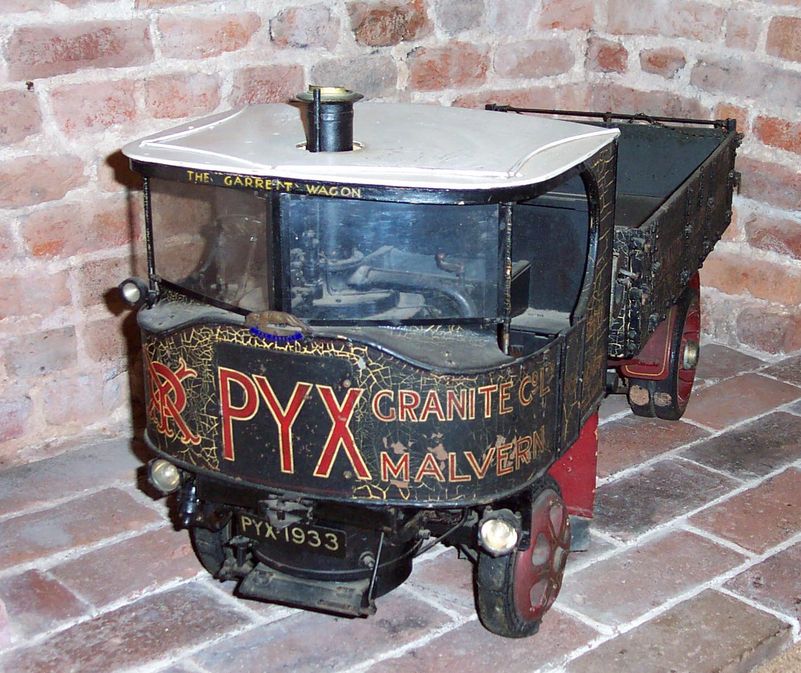