C. S. Kendall of Portsmouth ordered a 3-way tipping 6 wheeled wagon on June 14th 1931, and took delivery of wagon number 35464 just over a month later, on July 16th 1931. The wagon was painted maroon with red wheels and black chassis.

At some point the superheater was modified to entirely bypass the superheater tubes so that the wagon ran on saturated steam (which must have vastly reduced its performance). After going out of road use, the wagon was apparently used with the body removed with a gravel grading machine mounted on the back. The wagon was eventually left derelict on their wharf on Warren Avenue, Southsea, where it was discovered by Ian Woollett and mentioned in the Road Locomotive Society Journal. John Butler rode his Scott motorcycle down there to investigate in 1959, and an agreement was made with Kendall Bros. for him to buy the wagon for preservation for £45. 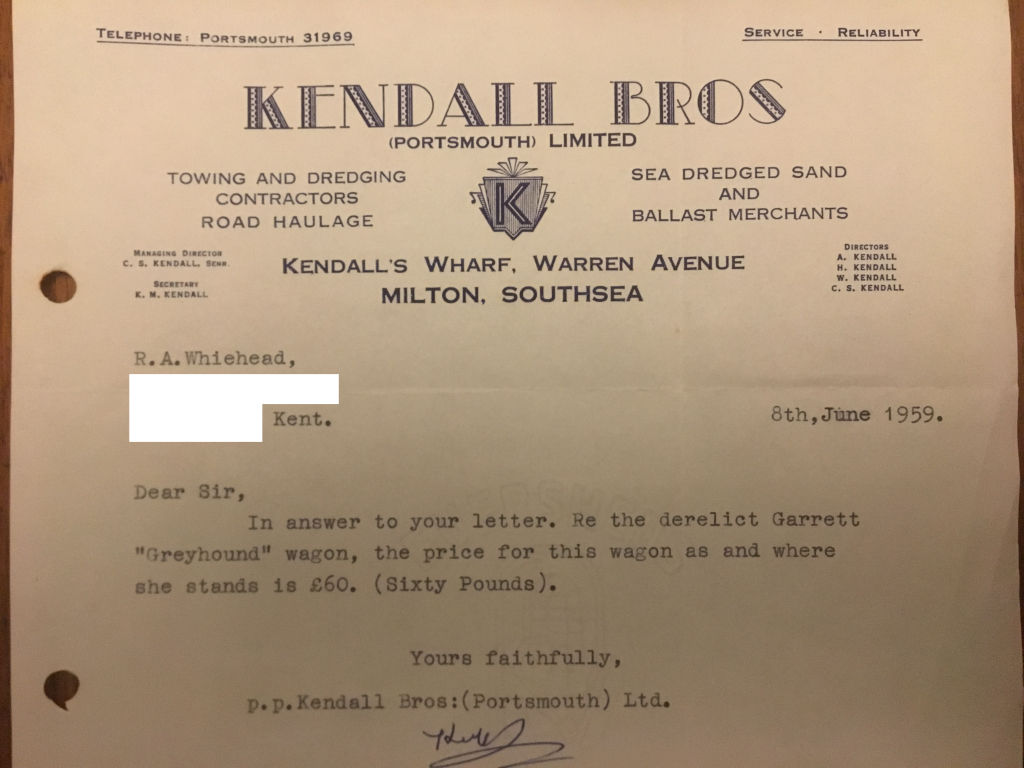 Tom Redburn moved the wagon to Dave Harding's yard in Edenbridge using his 1930 Scammell low-loader (a year older than the Garrett). The journey back was quite an adventure, as the weight of the wagon fully compressed the springs on the low loader such that the tyres rubbed on the mudguards. This was remedied by jacking up the trailer and inserting wooden blocks between the axles and chassis. When climbing a hill in Arundel, the clutch on the Scammell started slipping due to the load, and the hill was climbed by tacking across the whole width of the main road, whilst stopping oncoming traffic. As recovered, the wagon was largely complete, missing the body, safety valve, water tank and one of the steam brake cylinders, but was showing the effects of having been left in the sea air for decades. The body was later recovered from under a sea gravel pile by Kendalls and brought to Harding's yard in Edenbridge. The wagon was later towed to Hawden Farm in Tonbridge behind John's 1931 Foden steam wagon, works number 13848.

To assist with the restoration, Garretts were contacted, who were by that time Richard Garrett Engineering Works. After initially having no luck convincing them to assist, eventually access was granted to the works. It was discovered that a considerable supply of spare parts still existed on the shelves, as well as blueprints and many other records. This relationship led to the saving of many of the records from Garretts, including the comprehensive records that are now available at the Suffolk Record Office.

Upon inquiring at the works about the details of the construction of the undertype wagon boilers, it was discovered that there was a partially built boiler that had been started in 1950 for Garrett six-wheeled "Suffolk Punch" tractor 35332 at Randfontein Estates Ltd. The order had been cancelled, and so the boiler had been left with the firebox separate from the outer shell. An arrangement was made with Garretts and the boiler was assembled, with some alterations made from the mounting arrangements for the tractor configuration (although the firing chute and clinker door were left in the fore- and aft-positions). This boiler was fitted to the wagon chassis for some time (without being steamed), but in April 1988 was removed for use in the restoration of wagon 34841.